“Inspiration will come itself, but without work it can be waited forever” 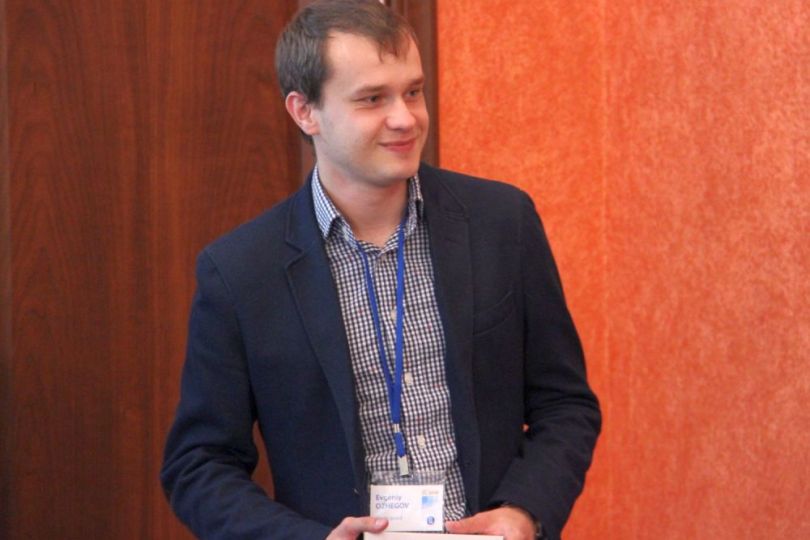 Evgeniy Ozhegov, Senior Lecturer of department of Economics and Finance, junior research fellow of the Group for Applied Markets and Enterprises Studies (GAMES), NRU HSE-Perm, told us what inspires him for new research, about the trends in econometrics and also shared his opinion, should scientific projects be applied or not. We publish the second part of Evgeniy’s interview for Perm branch site.

- You run students’ econometrics club. Tell us about it.

- We meet every Friday and discuss topical econometric models and studies. The idea of this study group appeared on impulse. We were recruiting volunteers for the advanced course on econometrics, but there were very few of them. At the same time we did not want to lose students who were interested in econometrics. That’s why we decided to create the club. 3rd year students, who have just started studying econometrics, joined it, and also the members of Applied economics centre. They also have the need to study econometrics for the development of their researches.

- An economist can’t do without econometrics?

- It depends. There are research economists, there are empiric economists. An academic researcher can’t do without it.  It is not bad, these are just different tasks.

- What are the trends in economic science now?

- There are many unexplored effects connected with consumers’ behavior. For example, how manufacturers choose the design of goods. We approximately understand how to study consumers’ choice: by their former purchases we define their choice and make forecasts. But we cannot understand in full, how a manufacturer chooses how to differentiate his goods from competitors. How to select the design optimally, keeping an eye on both competitors and consumers’ behavior – it is a challenging question which from the one hand is seemingly clear, but from the other hand is not studied deeply.

A great variety of new research methods appears constantly, we face the task of their practical application. I use such strategy: I read leading articles on econometric methods and think: do we have such tasks where it is necessary to show the application of these methods? And it turns out that such tasks exist, they can be found constantly in our data.

- In your opinion, studies must be applied?

- Those studies that we are doing, allow business either to work more effectively or to make some market structures more effective. But companies do not always understand how we can help them, they do not know the first thing about methods of study. We must understand their needs ourselves, explain and persuade. We can say that we have articles in leading scientific journals, we study the problem and we do it well, that is, we show our contribution to science through publications in journals. These are two inseparable issues: on the one hand, we need to try to attract businesses, because it will be interesting for themselves, on the other hand we need to promote ourselves through publications in scientific journals.

- Is business willing to communicate?

- Of course, we spend much time for detailed explanation. First of all we explain that we take some data and give our recommendations. For example, Perm opera and ballet theatre wants to see some recommendations on price policy. As for us, we try to find some scientific novelty in this study.

- What does work with students give you?

- It gives me new ideas. Students often come and say: this is what I am interested in. With this request they involve me in the subject domain, and I also submerge into it. It is pleasant to see my own contribution in students, it brings me satisfaction. For example, two my 3rd year students published their course works in “Applied econometrics” journal. It is the leading journal on economics in Russia and the target one for econometric studies. This fact tells about the level of knowledge of our students, it tells that we teach them well.

- Do students inspire you for new research?

- Certainly. I can give many examples. Our graduate student Alexandra Sidorovykh carried out a research how housing prices in Perm depend on transport accessibility of a district. There were similar foreign studies, but Russia has its own features. In the West it is important what time it takes to get to downtown by car, and in Russia it is important, how close is the public transport stop, how many lines pass through it. We selected transport measures which are not studied yet. It was shown that they are important and that people take them into account when choose an apartment.

- How much is econometrics developed in Russia?

- Now the information is available everywhere, we study by western course books, we read the best articles, we use state-of-the-art methods. It seems to me that in the nearest future we will not have such notion as Russian econometrics. Some time ago this split-up existed, in Soviet time econometrics developed in its own way. For example, in Soviet time game theory solved such question: “How many nuclear bombs it is necessary to have depending on their number in the USA”. In the West game theory studied competition between companies, which did not exist in the USSR. There were different economic systems which dictated different questions. Now we don’t have such borders.

- Who is a scientific authority for you?

- I can’t tell you one name, there are many authorities. Any author of the paper that has many quotations is an authority, because he made his contribution in his subject domain, it will do well to learn from him.

- Where do you find the source of inspiration when a study “gets stuck”?

- Every scientist is a writer in some way, because we need to write articles. And writers often say that you must not wait for inspiration, you must sit and work! Inspiration will come itself, but without work it can be waited forever. Although it happens very often that new topics for research or solutions of some problems come spontaneously. But they will not come if we don’t think of them and don’t study the literature connected with these topics and problems. It seems to me that the term “study got stuck” is used in a situation when you don’t want to work over it. You either have to take a grip on yourself or just start another topic.

- I go in for alpine skiing and riding a bicycle. I like active sports. It is adrenaline, speed and feeling of muscle loading outdoors. I go in for skiing for 13 years already, mainly I ski on Perm region resorts. I like one-day tour to Gubakha: while you travel there and back, it is 8 hours when you can work. And in between you can ski for 5 hours. I got familiar with a bicycle not long ago, since I was boring in summer.
Date
20 May  2016
Topics
Research&Expertise
Keywords
research projectseconometrics
About
HSE Campus in Perm