On March 27-29, 2013, the HSE–Perm hosted a visit by Professor Andreas Woudenberg of the Inholland University of Applied Sciences. 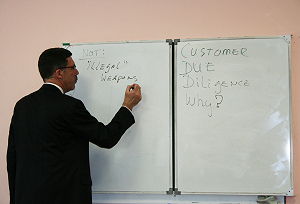 On March 27-29, as part of ‘Russia-Netherlands 2013: 400 Years of Friendship’, the HSE–Perm hosted a visit by Professor Andreas Woudenberg of the Inholland University of Applied Sciences (IUAS, the Netherlands). Professor Woudenberg gave a series of lectures devoted to the financial stability of the world banking system.

Both undergraduate and graduate students of the Economics Faculty and also faculty members attended his lectures. Professor Woudenberg identified issues in banking regulations under current conditions. He also touched on the essence and role of financial pyramids in the economy and the consequences of the financial crisis by giving an example of the banking system in the Netherlands.

Special emphasis was given to a discussion on the prospects of international cooperation and joint education programmes within the framework of cooperation between HSE-Perm and IUAS.
Date
29 March  2013
Topics
Education
Keywords
HSE guests
About
HSE Campus in Perm