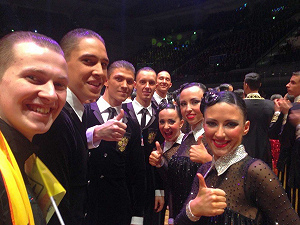 The dancers from Perm won in a close contest with the another Russian team, Vera, from Tyumen, but lost to the home team, an ensemble from Bremen. Duet scored 37.2 points from 40.

Marina Malinina shared her impressions of the championship: ‘This was an incredible moment in our lives, which we’ll remember forever. The impressions and emotions are inexpressible; we were overwhelmed with happiness. It was very surprising that our team had supporters not only from Russia, but from all over the world. We’d been working towards this result for a long time, we’d spent a lot of effort, time, blood, sweat and tears, but today all that is forgotten! The main thing is the result, and we’re all delighted with it’.

Duet Ensemble dancing at the World Championship in Bremen: