In 1930 the building of factory 'M' (From the word ‘motors’ - engines) in Perm was announced in Russian newspapers. This choice of location was no accident. The Perm Region had a solid basis for such a development: Motovilikha military plants, qualified personnel, a major railway hub, the Kama River Shopping Company, Kizelovsky coal basin and a university.

Only a few years later, in 1935, test pilot Vladimir Kokkinaki used a fighter plane built according to the factory’s design, created by A. D. Shvetsov, to reached a height that was previously unattainable – 14,575 metres.

During the Second World War, the fighters Lavochkin, Gorbunov and Gudkov and aeroplanes Tupolev, Polyakov and Sukhoi flew with the Perm Engines M-28. The Perm-made M-82FN was installed on the new fighter plane Lavochkin, which surpassed all previous engines at 1,850 horsepower.

The ASh-82 engine, named for Arkady Shevtsov, is proven to be unfailingly reliable, easy to maintain and resilient. It has remained in production for 37 years. The Ash-62IR for Li-2 and An-2 aeroplanes was produced for 40 years. The Il-14 with the Ash-82 engine remains in production today.

The dual-circuit D-20 engine was installed on the Tu-124 aeroplane, and a modification of it was installed on the Mi-6 helicopter, for which the engineers at Perm Engines built a unique R-7 gearbox that was considered unsurpassed in its power for a quarter of a century, at 11,000 horsepower.

The most exceptional creation of the Perm engineers is the famous ‘thirty’. The engine D-30 for the Tu-154 served as the base for the propulsion of the Tu-154 and Il-62M aeroplanes, as well as on the unmatched, all-weather fighter-interceptor Mig-31 and the M-55 Geofizika, which reaches unthinkable heights.

Notable Perm engineer Pavel Solovyev’s last addition to the domestic and international engine industry was the new generation of the D-90 engine, later named the PS-90A in his honour, which are used in the Il-95-300 and Tu-214 aeroplanes as well as the presidential aircraft ‘Russia’.

Today, the Perm Motor Industry Complex (PMK), which includes the open joint-stock company (OJSC) Aviadvigatel and the OJSC Perm Engines, produces aircraft engines for civil and military aviation, the world’s most powerful rocket engines RD-253, unique redactors for the KB Milya helicopter and gas turbine and gas-pumping units for gas and oil pipelines. In addition, PMK is actively taking part in the creation of the new Tu-234 aeroplane. Two Perm PS-90A engines will be installed on the aircraft. 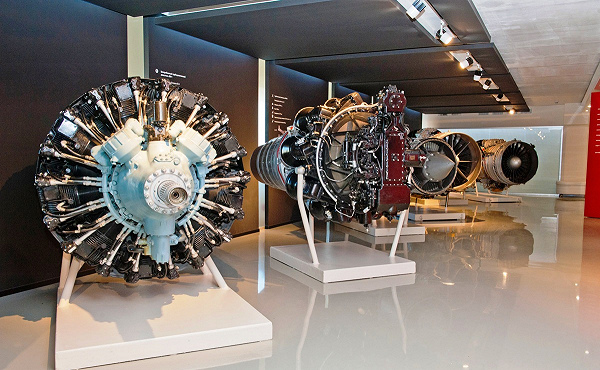 The Perm Region is proud of Perm Engines. The company’s brilliant designs allow it to participate in many international forums and conferences each year, as well as receiving awards and recognition.

Anyone who wants to can visit the factory workshops and the unique JSC-Star factory, with its many interesting exhibits, interactive screens and unusual design.

Before the revolution Russian paper currency was printed in St. Petersburg. However, during the Civil War, due to the need to increase the output of paper currency, Sovnarkom decided to 'urgently equip and start up the Perm factory Goznak. They transported the printing equipment to Perm from Penza and sent over trains of workers from Petrograd and Moscow. In February 1920 the first Soviet banknotes were printed in Perm.

The Perm Printing Factory, a branch of Goznak, is one of the most modern printing companies in Europe today.

In the past decade Goznak has poured significant resources into the modernisation of the printing factory in Perm. In October 2006 a new banknote production complex was launched here. The spacious, light workshops of the new complex are equipped with the most up-to-date printing equipment. The internal logistics of the production of banknotes was changed, including the automation of warehousing and storage of incomplete products.

In the factory the production of security documents on a plastic base is organised according to the most modern requirements. Here they produce bank cards for the international payment systems Visa and MasterCard, the plastic pages with electronic information chips for overseas Russian passports, travel documents for refugees, residence permits, compulsory health insurance policies, universal electronic cards (UEK) etc.

In 2016 the output of bank cards for the national payment system Mir was started. The production of the cards was successfully certified. 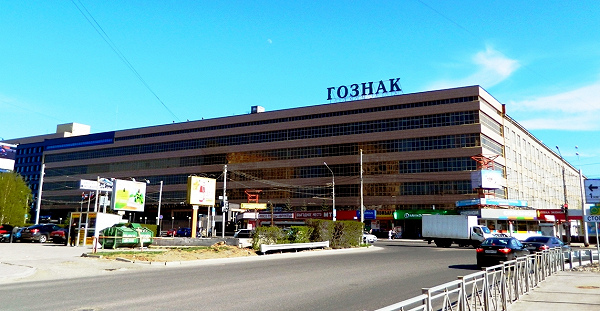 At the Perm Printing Factory, they produce 12 different types of control identification marks (KIZ) for clothing labels and other natural fur products using FRID tags, which are microprocessors placed within the products themselves.

The factory is equipped with high-tech machinery that is able to complete the most difficult operations. Today there is no technology associated with the production of banknotes and security documents that can’t be found at the Perm Printing Factory.

The Perm Confectionary Factory is the oldest candy factory in the Urals and Siberia!

The factory was founded in 1892. For more than 125 years the factory has been using its beloved candy recipes, releasing new candies, working at an international standard and

carefully monitoring its production quality. Every Perm citizen has been familiar with this factory’s products since childhood!

· 86 regions of Russia and 18 countries, including the USA and countries of the Commonwealth of Independent States (CIS) and the European Union.

· 85% of Perm citizens love and are proud of Perm’s candies and one in two of those surveyed has bought them as a gift for friends, colleagues and partners from outside the city

· More than 90 companies in Perm and Russia regularly work with the factory, ordering candies as corporate presents for their partners, New Year’s gifts for their employees and as private-label goods for business.

Proton-PM is the leading company in Russia’s space industry. The RD-276 engines of the first-stage ‘Proton-M’ carrier-rockets ae recognised around the world as the most reliable of their class. The company has more than 4,000 employees.

The company specialises in the production of liquid-fuel rocket engines for first-stage carrier-rockets of the medium and heavy class. They have been in production for more than 50 years. Over the years the company has established a high-tech complex for the making of products that are destined for space. It is the most reliable in its sector of the market. Their international recognition puts a lot of responsibility on the entire staff and the serious competition of the space industry gives them the motivation for further development.

Without a doubt, Proton-PM’s main priority is to support Russia’s strategic advantages in space. The company is participating in the production of the new generation RD-191 engine for the promising carrier-rocket family ‘Angara’, which is being produced by the Khrunichev State Research and Production Space Centre.

As a socially responsible company, Proton-PM always takes an active position in relation to its employees and the residents of Perm and the Perm Region. It’s participation in the life of the city is reflected in its support of the development of an education and innovation infrastructure, social and cultural facilities, the creation of new jobs and supporting promising specialists. They have already established a number of programmes to train qualified workers and the necessary conditions for career growth within the company.

Promobot is the leading producer of service robots in Europe. The company is making developments in the spheres of mechatronics, electronics, artificial intelligence and neural networks, autonomous navigation, voice recognition, the creation of artificial skin and muscles as well as conducting research on interaction between humans and machines.

Promobot was established in Perm in 2015, before which it was based in Skolkovo. They supply service robots on the internal market and to 38 countries as administrators, promoters, consultants, guides and concierges, replacing or supporting human workers. With Promobot, the future seems sooner. 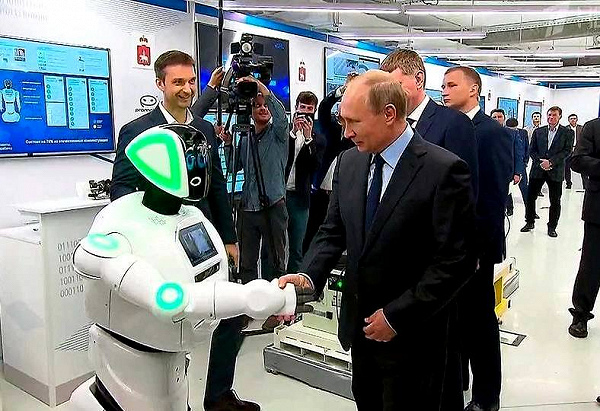 The company Uralkaliy is a world-leader in the production of potash fertiliser. It was founded in 1934, when the Solkamsk Potassium Plant was launched, and two years later the building of the Berezniki Potassium Plant began. Both plants became part of Uralkaliy. In 2011 the companies Silvinit and Uralkaliy merged to become a stronger potash production company under the name Uralkaliy. In 2014 the company gained the status of a public joint-stock company. Their headquarters is located in the city of Berezniki and their production centres are in Berezniki and Solkamsk.

The company mines potash ore and produces fertilisers and products for customers. They are developing one of the biggest, and in Russia the only, deposits of potash-magnesium salt in the world at Verkhnekamsk. The company’s share of the world production of potash is 20%.

Uralkaliy exports around 80% of its products to around 40 countries, including Brazil, India, China, the USA and countries in South-East Asia. 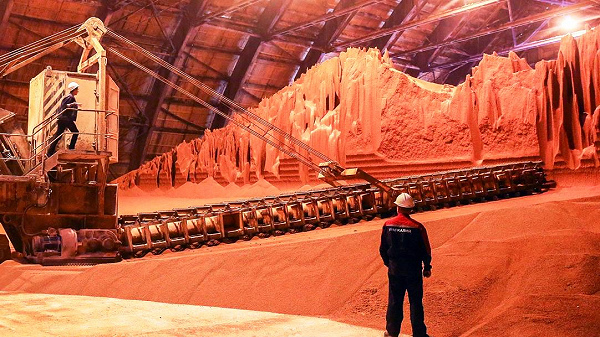