Brands of the Region

The emblem of the Perm region is an image of a silver bear going to the right, placed on a scarlet (red) heraldic shield; on his back rhere is a gospel in a gold frame with an image of an eight-pointed cross. The gospel is crowned with a silver broadened concave cross at the ends. The shield is crowned with a princely crown.
The flag of the Perm region is a rectangular cloth divided by a white cross into four equal rectangles: in the upper part of red, azure (blue) color, in the lower part - azure (blue) and red color. In the center of the white cross is the image of the emblem of the Perm region. 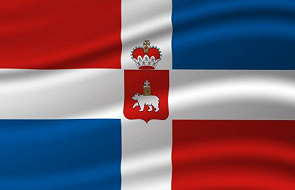 The ancient people of Prikamye, the ancestors of modern Komi-Permyaks, in their pagan religion worshiped the heavenly deities - the Sun and the Moon - and believed in their origin from animals and birds. Well-preserved works of bronze art casting, known under the name “Perm Animal Style”, tell about their worldview, awareness of their place on earth and in outer space. 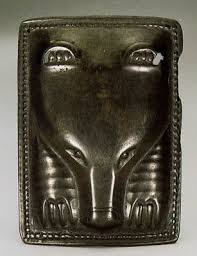 Plots of the Perm animal style are diverse: animals in profile, swimming birds, birds with spread wings and a human face on their chests, some birds have a full-length human figure on their chests. A lot of badges with bears in a sacrificial pose - the head between the paws. There are also human figures - one or several in various combinations. There are complex two- and three-tier compositions with a central anthropomorphic character (goddess). There are many images of horsemen in the Perm animal style. Items were found in treasures, shrines, on bones, in burials, in sacrificial complexes and in the places of metallurgical workshops.

Perm wooden sculpture ("wooden gods") represents carved icon sculptures made by folk craftsmen. Perm wooden sculpture was distributed in churches in the north of Perm province in the XVII - XIX centuries. Local people, long since adhering to paganism, even having converted to Orthodoxy, could not worship flat icons. Therefore, they carved the figures of Jesus and other saints from the tree, essentially continuing the tradition of worshiping wooden idols. Such voluminous images were much closer to them. 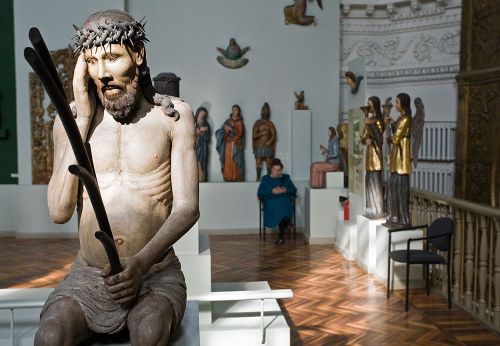 The peculiarity and amazingness of the Perm wooden sculpture lies in the fact that it is portraits and basically has the features of the Komi-Permyak population of the region.

Unlike many other geological periods, the Permian period was distinguished not in the British Isles, but in Russia. Deposits of this age are absent in England, at this time there is a massive disagreement.

The Permian period was identified in 1841 by the British geologist Roderick Murchison in the area of ​​the city of Perm. Now this tectonic structure is called the pre-Ural trough. Murchison also found its wide distribution in the Urals and the Russian Plain.

The hard work of salt miners has been valued in Russia since ancient times. But for a resident of the Kama and Volga cities, these people were as if invisible. After all, salt was mined in the distant Prikamye from the 14th – 15th centuries. And salt porters as mooring movers unloading barges descending the ramp with huge bags, were visible to everyone. Therefore in the capitals the works of the Solikamians were known only by hearsay. So the symbol of salt business in Russia was not a merchant or saltman, but an ordinary river loader. A monument “Permyak - Salty Ears”, known to Perm citizens and tourists, was erected in his honor, and the inhabitants of Prikamye were called so as well for many years. Perm region remains one of the largest producers of potash salts in the Verkhnekamsk salt deposit in the world. Several large enterprises operate in the cities of Berezniki and Solikamsk, and new mines are being built. Today's "Kama Salt" is the basis for the production of potash fertilizers used in agriculture around the world. 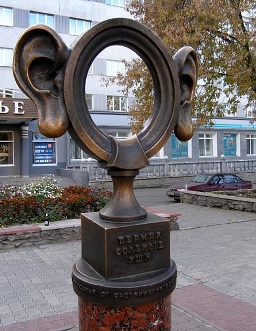 Souvenirs from the Region

A Perm souvenir is, as a rule, an image of an animal from local ornamental materials. And semiprecious stones, of course. Tourists arriving for the first time in the Perm region are amazed at the amazing variety of figures depicting a bear in a sacrificial pose, who looks at them from almost any shop-window with local souvenirs. Bear, as a symbol of the Perm region, of course, is not accidental. This is a reference not only to the historical past of Prikamye, but also to the traditions of the fine art laid down by the Perm animal style. The placers of colorful bears and other inhabitants of the Ural forests were created by local artisans from a variety of ornamental materials, among which a light stone stands out, in which rays of the frozen sun seem to be visible. It’s a paradox, but this sunstone is called “selenite”, which in literal translation refers us to the ancient name of the moon. The “Moonstone” on the shelves is crowded with a serpentine, rock crystal, quartz, onyx and jasper with agates. 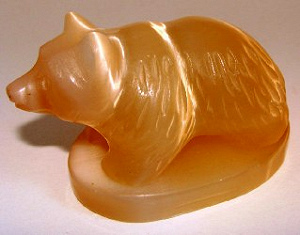 The Ural land is rich not only in expensive emeralds. Yellow-lemon citrines are mined in the circumpolar regions. Agate and marble are used to make jewelry and various art products. Local craftsmen use semiprecious minerals in their work, such as alexandrite, tourmaline, beryl, aquamarine, amethyst and others. By the way, it is believed that the Ural amethysts are the most expensive in the world. Violet stones are very common. But sometimes, extremely rarely, stones are dark red in color. A variety of vases, caskets and decorative elements are made from Ural stone rhodonite, and from almost a dozen types of jasper - art panels, sculptural compositions and other souvenir products. All this variety can be seen and touched in the numerous souvenir shops of the Perm region. Some ancient scholars attributed the "moonstone selenite" to building materials. Others  elevated it to the rank of semiprecious. One thing is for sure: the hands of Ural craftsmen are able to create magic from stone.

Perm ballet is famous all over the world. Perm is called the third ballet Mecca after Moscow and St. Petersburg. But few know that Perm has one of the best choreographic schools. Graduates of the Perm Choreographic School scattered around the world from America to Australia, from Ireland to Japan. Many of the graduates worked successfully, and some continue their careers abroad in the USA, Germany, Holland and Israel. In many choreographic schools and amateur studios, college students have taught and are teaching. Many theaters in Russia accept graduates of the Perm School in their troupes. In Nizhny Novgorod, Ufa, Perm today they are leading soloists. A whole Perm diaspora has developed in St. Petersburg, ballet dancers trained and educated in Perm dance in Moscow theaters from the Bolshoi to the Kremlin. But no less willingly accepts graduates of the Perm Choreographic School and the Perm Academic Opera and Ballet Theater named after Tchaikovsky. The only one in Russia where all stage works of the composer (ten operas and three ballets) were performed at different times, the Perm Theater became the real House of Tchaikovsky.

To this day, the inhabitants of the region use food products that are not always widely known, which are not found on the counter in the store. Snyt' is a perennial herb, found on rich soils in deciduous and mixed forests, on clearings, among shrubs. Young leaves and puff petioles are suitable for eating in the form of a salad. They are added to borscht and soups instead of cabbage, mashed, the greens of the season has a pleasant smell and are used as a seasoning for a variety of dishes. They also can be pickled with vinegar, caviar and side dishes are prepared from them. In folk medicine, snyt' is used for gout and rheumatism. Its leaves contain a significant amount of protein and relatively little fiber.

Pistiki - a young field horsetail grass - is rich in vitamins and makes you full quickly. But to collect at least a small bucket, it takes a lot of time. Pistiki are used in scientific medicine as a diuretic, anti-inflammatory, hemostatic, restorative, wound healing and astringent. They help with heart failure, improve water-salt metabolism. In folk medicine, the use of it is the same, in addition, horsetail grass is used in the treatment of malignant neoplasms, external and internal bleeding, gall and kidney stones. Komi-Permians consider field horsetail the second bread. The plant is salted for the winter and all year round they prepare national dishes from it. Pies stuffed with pistiki are especially tasty, and some housewives also cook souffle and dumplings. 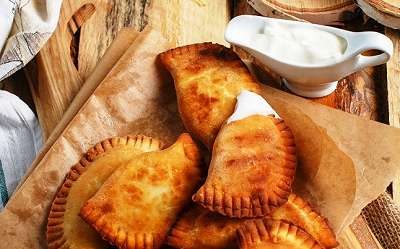 Also, it is worth mentioning the famous Ural posikunchiki. This is the first dish that guests of the city are offered to try. Posikunchiki are small pies, literally for two bites. After a little bite a hot broth will splash out of it. There are posikunchiki with vegetable filling: with radish with honey or with baked turnips. Since they are small, they are taken in large quantities - a dozen or two. They are usually eaten hot, dipping in sauce. “Makalo” - that's what these sauces are called. “Makalo” can be made with mustard, vinegar and salt, or based on kefir or sour cream.